By The St. Louis Post-Dispatch. 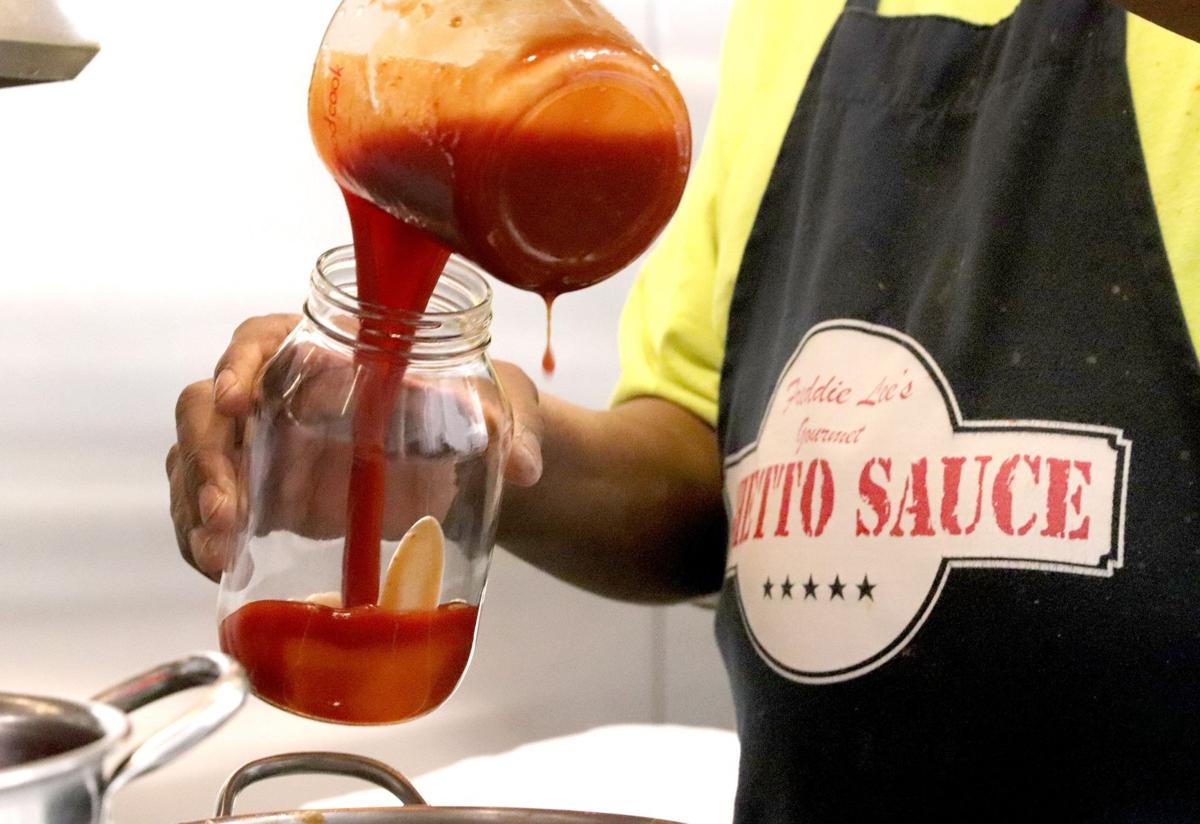 Freddie Lee James, creator of Freddie Lee’s Ghetto Sauce, fills jars of sauce for one of his clients, Ferguson’s Red’s The One and Only Barbecue, Monday, March 15, 2021, in his production plant in St. Louis. Red supplied the recipe to James, whose Ghetto Sauce recipe is different. Photo by Hillary Levin, hlevin@post-dispatch.com

After a year of sweating it out financially, STL barbecue sauce sultan Freddie Lee James Jr. plans to once again promote his pork-friendly potion at fairs, festivals and farmers markets.

He prepared for a similar run last year, spending early 2020 lining up an appearance schedule to take him all over the region.

Then, the coronavirus shut him down.

“Everything was popping — and then it all just ground to a halt,” James said.

James chatted about the challenging year as he and Deborah James, his wife and business partner, worked inside the company’s small office and production plant.

It’s a 2,700-square-foot space near the Lumiere Casino that James loves to call the “world headquarters of Ghetto Sauce.”

To say the least, the pandemic cramped James’ style. Along with being a sauce sultan, he’s also a natural salesman. For the last 10 years or so, James and his wide smile have been on the road most weekends, meeting with folks and selling them sauce.

“That’s how this really all got going, how people came to know my product.

It’s always been my go-to selling tool,” James said of his event appearances.

“Can’t begin to tell you how many places I’ve been, handing out samples.

But let’s go back to the beginning.

Ghetto Sauce — both the “hot” and the “mild,” which is more like a “warm” — bubbled up years ago on a stove in a kitchen of a home in the Greater Ville neighborhood of north St. Louis.

The name came from those early days, when Freddie Lee joked to Deborah that maybe the extra money would let them “move out of the ghetto.” But the couple still lives in that same house.

“We’re still there,” he said. “We’re never going to forget where we came from.”

His homemade sauce proved to be such a hit with friends and relatives that they started giving him jars to fill whenever he was making a batch.

So James decided to turn his hobby into a business.

In 2010, while James was still working full-time at the construction laborer’s job from which he retired in 2015 — the couple rented space in a commercial kitchen at St. Patrick’s Center.

Three years later, sales had climbed fast enough to force the couple to move their operations to a larger commissary in Belleville.

And every weekend, James would hit the road to hawk his sauce at any place that invited him. Eventually, boutique grocers and meat stores started
carrying his product.

The sauce is now sold in about 1,200 locations, including the Hy-Vee, Straub’s and Schnucks chains. (At Schnucks, it is sold under the more politically
correct “American Gourmet Sauce.”) James said Straub’s first orders were labeled under the more bland brand name.

“But they called me later and said, ‘Quit sending American Gourmet; give us the Ghetto Sauce,’” James said.

In 2017, Ghetto Sauce was named as “small business of the year” by the Justine Petersen organization, which helps small businesses secure loans.

Then in 2018, his sauce was served at the Governo’s Mansion in Jefferson City at the annual Taste of Missouri.

With all that success, the couple moved into their “world headquarters” in April 2019.

“There were no calls, no sales, no events, but we still had to pay our bills,” James said. He had to lay off five of his six employees.

“But later in the summer, online sales picked up some. And then we started bottling sauces for (eight) other small companies around town,” James said.

“Had it not been for that, this place would have shut down,” he said.

But 2021 holds far more promise, James said. “The phone has started ringing again and I’m setting up my event schedule for this year.”

In fact, James will kick off his road tripping on April 9-11, as a vendor at the St. Charles Home and Garden Show at the city’s convention center.

And he will definitely return to his every-Saturday morning Soulard Market space, which he took over in 2019.